Jaguars of the Pantanal

What an excellent trip to the Pantanal we just had. Thank you all for your sound advice encouraging us to go. We'll need to post a few entries about it because there were *so many animals*--we'll start with some of the best. While staying at the Pantanal Jaguar Camp in Porto Jofre, Brazil, on a tour with our friend/guide Ailton Lara, we were able to see not one, but 4.5 jaguars in five days. 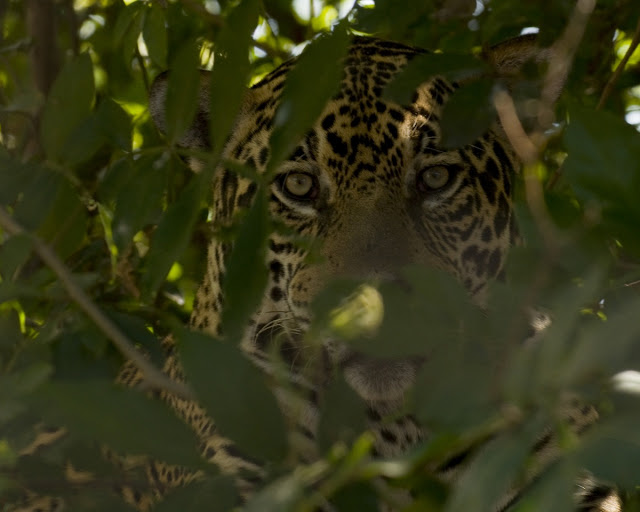 This male jaguar was our first and most frequently seen (on three days for us). Our first look at him was through some foliage, but he soon came out onto the riverbank to relax. 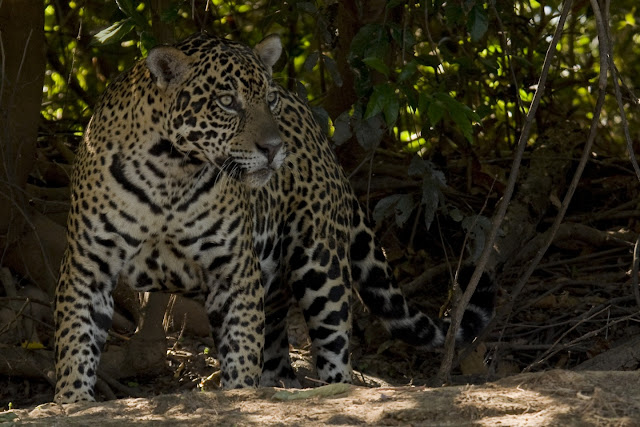 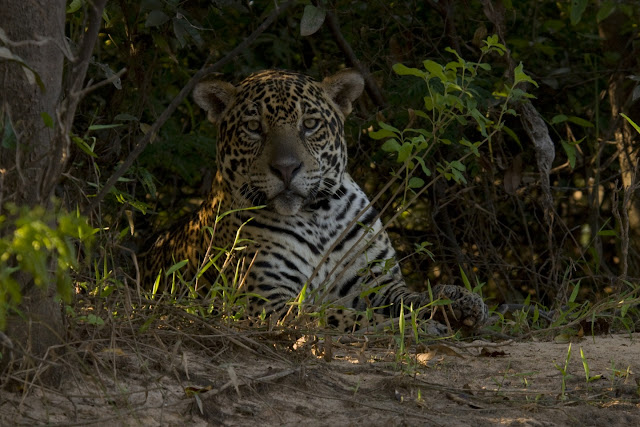 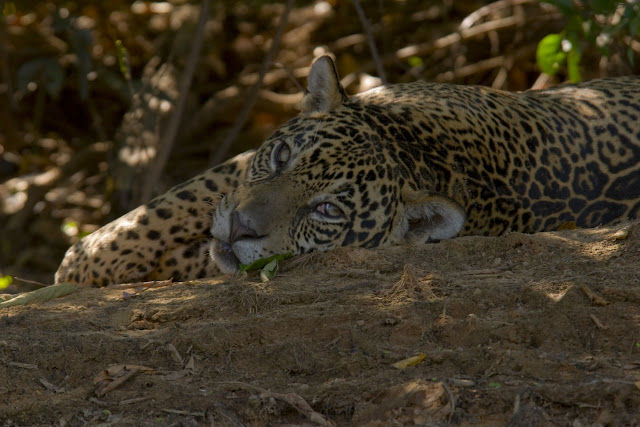 We felt extremely privileged to spend time observing him. Eventually he wandered into the foliage and we headed up the river to look for more wildlife.
On a small, beautiful river, we saw a female jaguar sunning herself on a bank. She got up and walked along the forest edge, and we then saw a second head pop up: her mate! Ailton explained to us that when jaguars are breeding, they spend about a week, maybe a little more, together, mating, resting, and not much else. 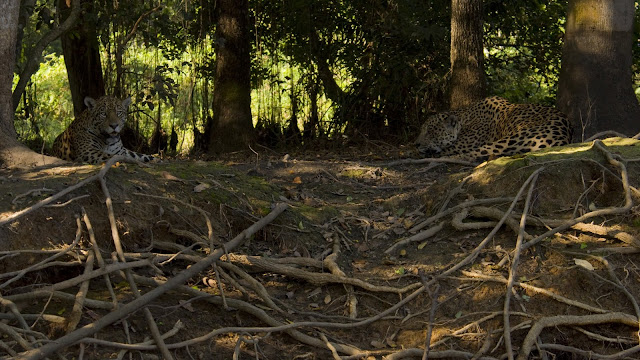 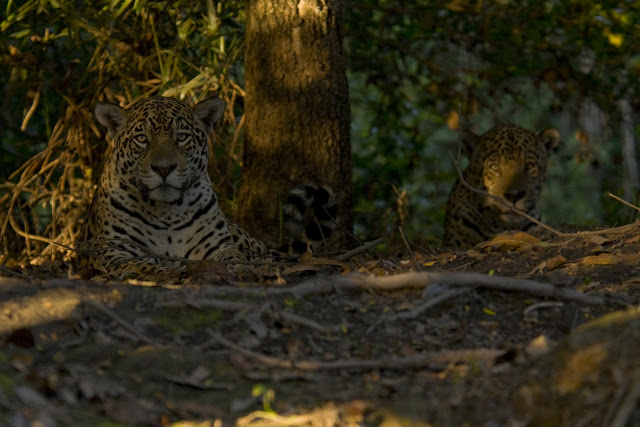 After laying around for a while, the female would get playful and roll over on her back with purring/growling. Then, she'd get up and walk by the male, and they'd kind of try to bite each other. He'd get the message and follow--and then it was all over in about 10 seconds, with some yowling, swiping of paws and biting. He would jump away and she'd roll over onto her back or side again, and then they'd both rest for a while. This happened at least three times while we watched...and we heard more after they went deeper into the forest. Here are a few close-ups of the female. 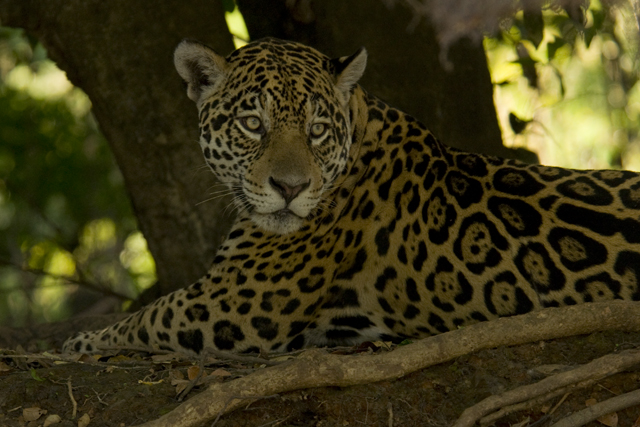 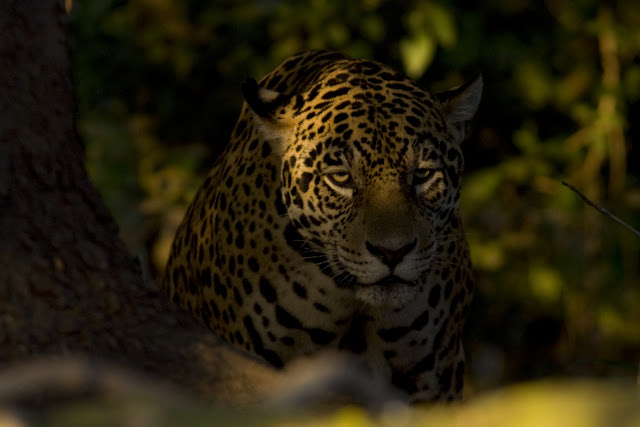 Over the next few days, we saw the lone male again, along with a brief sighting of another male jaguar--this one was blind in one eye. Photos of him didn't turn out so well. And then, there was our .5 jaguar the morning we were leaving: it was sitting on a river bank just a short boat trip from the camp. Ailton spotted it, and Mike was able to catch a glimpse of it before it headed for the forest, but only for a brief moment. No photos of that one. Instead, here are a few more of the male we'd first seen. 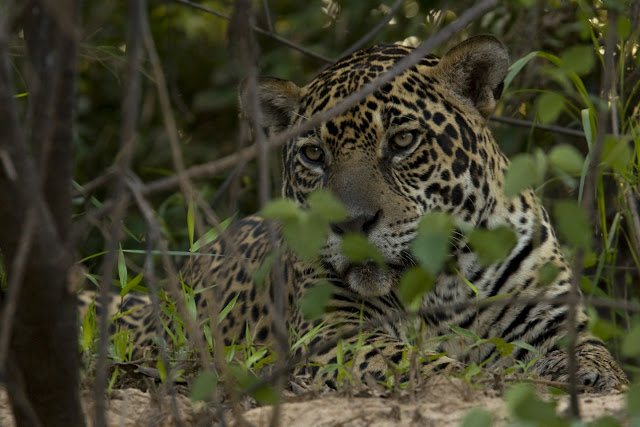 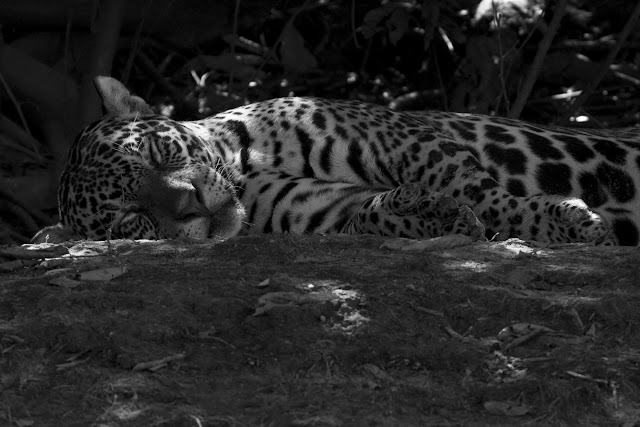 Highly recommended for anyone who likes seeing rare wild cats in their natural habitat. Next post: other fantastic wildlife from our trip, including the one we'd wanted to see about as much as the jaguar...
Posted by Emily and Mike at 12:42 AM

Emily and Mike
We left New England winter and spent a month and a half in the Peruvian Amazon, followed by three months at Kekoldi Indigenous Reserve in Costa Rica. After we wrapped up our bird netting and banding research, we took some time to explore. Wildlife watching and exploring interesting tropical habitats are two of our main interests.

Should we try to go to Brazil in June?